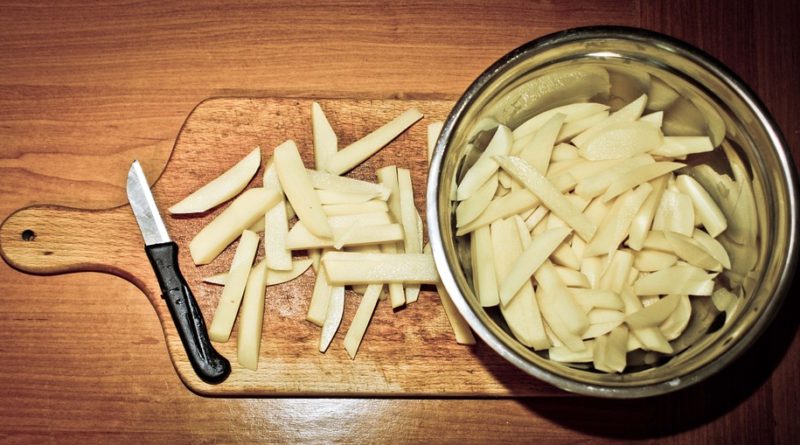 Some EU frozen fries producers have entered a trade fray over anti-dumping duties levied by the Colombian government upon their products. The companies are based in Germany, Belgium and The Netherlands.

What does the UK have to do with this? Effectively, nothing, but as it turns out, Colombia is not the first country to impose anti-dumping duties. Brazil and South Africa went before them, in 2016-2017. Brazilian complainants made their case by comparing the prices used by the European potato processors for export to Brazil to the prices used for export to the UK. Allegedly1, the Brazilians had to pay prices that were 18 to 41% lower then the UK.2

A case like this reveals the dynamics of international trade. Countries, or groups of countries like the EU, agree on their mutual trade terms and conditions3, thus setting the rules the companies based in the countries involved have to adhere to – like ‘no dumping’. In their zeal for sales numbers, sales executives make advantageous and not so advantageous deals abroad, ignoring – or maybe simply being unaware – of the price gap they have created between their export prices – pushing it off to penetrating new markets, or simply improving sales. Possibly, they had a target set on increasing market share, gaining on other international producers, either within the EU or abroad.

If their goal was indeed to increase market share, then they have succeeded, as you can see in the pie chart below: 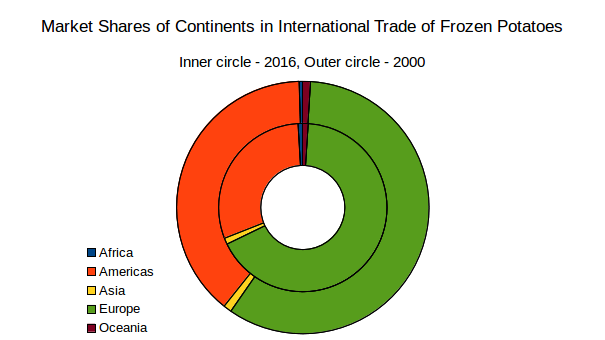 Since 2000 the share of European frozen potatoes producers has increased at the expense of, mostly, the Americas.4 If we take a closer look how the market share of the Americas is divided, this is the picture: 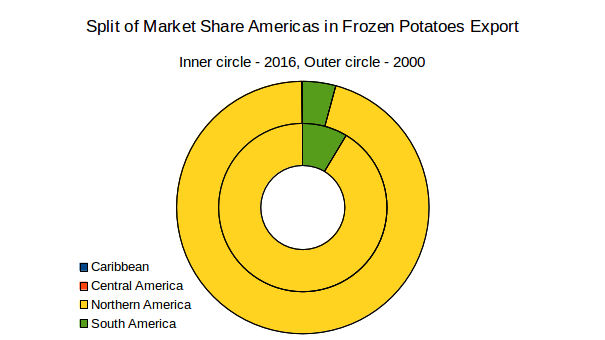 North America takes the lions part of the market share of the Americas.5

This did not come unnoticed in North America. In a magazine targetted at potato farmers, I read:  “North America continues to lose market share in the global French fry market. It is not that exports have failed to grow during that time; they have increased an average of 4.6 percent per year. However, EU external exports have increased [more] during that 15-year period. EU processors – especially those in Belgium and the Netherlands – have been in expansion mode during that time. They have focused on increasing exports to countries outside of the EU.”6

Companies do not sell products abroad through exports alone. They can get access to markets in other countries through foreign direct investment (FDI), for example by investing in production facilities abroad, like McCain has done in Colombia7  or South Africa8.

Let us be clear that investigation into anti-dumping allegations are not instigated by government officials. Someone has to do the alleging to get the ball rolling. Typically this is someone, a party, who is injured because of the dumping. In South Africa it was McCain, supported by other producers, that instigated the investigation.9

Once allegations are made, the ball is in the corner of the government, who has to launch an investigation into the alleged dumping. Sometimes governments will, at the start of such an investigation, impose a safeguard duty – a preliminary measure to alleviate the alleged injuries while the investigation is ongoing. Dumping in itself is not enough to levy an anti-dumping duty. Domestic parties have to be injured, for example through a loss of market share, because of the dumping.

The instigating parties have to make their allegations plausible, while the accused companies have to defend themselves. Aviko, a Dutch brand, has apparantly been able to make its case, since the Colombian government lowered the anti-dumping duty on its products to 3.5%, whereas other Dutch producers are faced with a duty of 44%.10 Remember the price gap between exports to the UK and to Brazil? For the Netherlands, this was over 40% in 2016.

You could use this case to deepen students’ understanding of dumping. Dumping is not dumping because it fits the definition. The investigation into the alleged dumping has to decisively show that the export price is indeed lower than the exporter’s home market price and their is genuine (material) injury to domestic parties.11

Next to that, you could use this case to improve the students’ insight in the agents involved in anti-dumping agreements and measures.