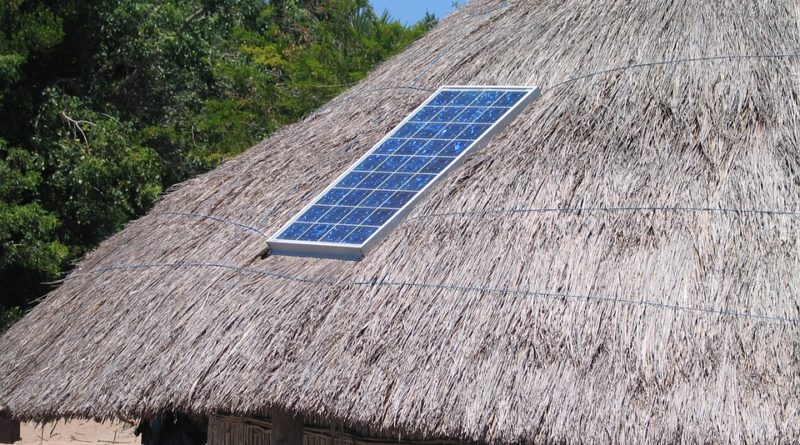 I have now reached chapter 14 of the textbook I am using, and I mean to speed up this year, in order to finish the book next summer. Chapter 14 is about indirect taxes and subsidies. In this post, I want to focus on subsidies. The author, Alain Anderton, uses the model of supply and demand to analyse the effect of a subsidy on both supply and demand. He takes the perspective of a subsidy that falls to the supplier, like the subsidy on French films mentioned in the chapter, or aid to agriculture the European Union (EU) (used to) grant(s). But not all subsidies fall to suppliers, subsidies like housing benefit or subsidy on solar panels fall to buyers. I wondered if an analysis from the perspective of the buyer would give another result, all other things equal.

To investigate this, I set up a simple model of supply and demand.

First I did the analysis from the perspective of the supplier, to have something to compare the buyer perspective to. 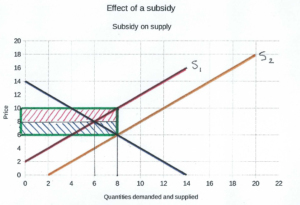 In the model shown above you can see a shift in the supply curve from S1 to S2 as a result of the government subsidy, which is 4 per item sold. As a consequence the market equilibrium shifts to the right, resulting in a lower equilibrium price of 6 and a quantity demanded and supplied of 8. Since suppliers receive 4 on each item supplied, the total market revenue is not 6 x 8, but (6+4) x 8. To calculate the total market revenue we have to consider the supply curve exclusive of the subsidy. The government pays 4 x 8 there-off – the green box -, but, counter-intuitively, this amount does not completely fall to suppliers. The reason is, suppliers are now supplying at a lower price, 6 instead of 8. This means that actually half of the subsidy on each item supplied falls to the buyer – the area hatched dark-blue.

Now let us shift the perspective from supplier to buyer. 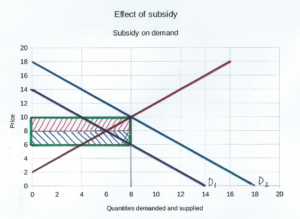 The model above shows a shift in demand from D1 to D2 as a result of the subsidy. At each price level, demand is higher.  As a consequence the market equilibrium shifts to the right, resulting in a higher equilibrium price of 10 and a quantity demanded and supplied of 8. Since suppliers are paid 10 for each item, the total market revenue is 10 x 8. The government compensates buyers 4 x 8 of the total market revenue through subsidy – the green box-, but, counter-intuitively, this amount does not completely fall to buyers, although they do receive the actual money. The reason is, suppliers are now supplying at a higher price, 10 instead of 8. This means that actually half of the subsidy on each item bought falls to the supplier.

What I found is that a division of subsidy money in itself is rather counter-intuitively, since the actual money flows to either buyers or sellers. I assume students can have a hard time understanding that, in fact, as a result of the price mechanism, the other party gets away with a percentage of the subsidy-pie.Scanned Document

Next to the effect of a shift in perspective, I wondered about the effect on both the consumer surplus and the producer surplus. I used the supply perspective to analyse that.

This analysis allowed for some tinkering, since I have cut out the old surpluses, and used these to cover the new surpluses, to assess how much surplus is gained. 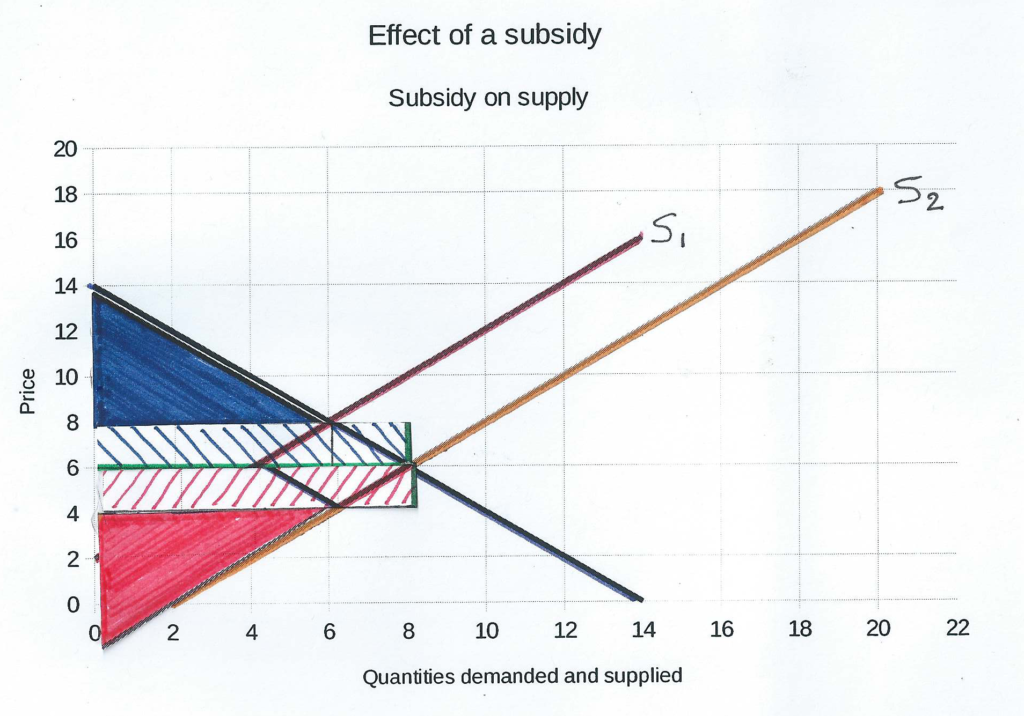 The diagram shows that the gain in surplus of both suppliers and buyers is financed by the government. A part of both hatched areas are outside of the surplus, together making up an amount of 2 x 2.  Could this be the added surplus to society for increasing quantities supplied?

Although the surpluses are regarded as the market’s contribution to the general welfare, I tend to disagree, since markets do not take the welfare effects of externalities into account. But if the subsidy is aimed at increasing renewable energy, like a subsidy on solar panels, the effect could be positive.2

The market model has obvious limitations in terms of its predictive value, since it is a radical simplification of reality. I do admire, however, the analytical possibilities of the model and the way the diagrams help to visualise the analysis. I think it can be helpful in understanding the possible impact of measures like taxation and subsidising to improve market outcomes.3

How to use this in your lesson?

I suggest to allow students to tinker themselves with a numeric example of a subsidised market. Can they then generalise it to the abstract, like it is done in my textbook, with letters instead of a numeric example? It is better they recognise how counter-intuitive the distribution of the subsidy is in your lessons instead of at the exam.

You could also change the perspective of the analysis like I did in the above. This would give another result and yet the same, since the price exclusive of subsidy as paid by the buyer is the same from both perspectives: 6.

You could even take it one step further and integrate the analysis with an analysis of the effect on the consumer and producer surpluses. Give them one copy of the model before the subsidy and one of the subsidy-model, a pair of scissors and some glue, and let them figure out how the surpluses are affected and how this relates to the distribution of the subsidy.